Learn about the increas 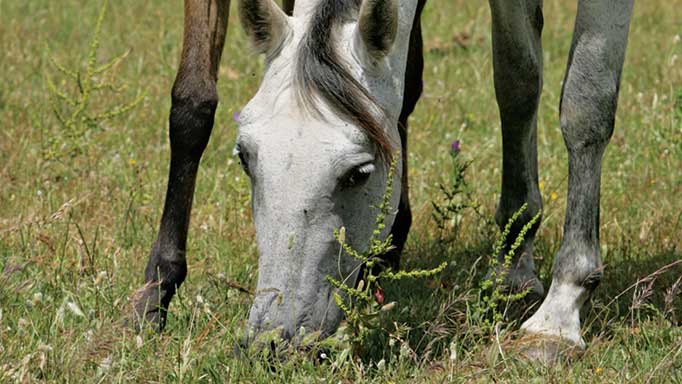 For decades, horse owners have followed a standard regimen for deworming their horses: treating all horses on the farm every two months and rotating which drugs are given at each worming. In recent years, however, many parasites have developed resistance against the very drugs that are intended to kill them.

That means horse owners need to seriously rethink the traditional approach to parasites, advises Dr. Martin Nielsen of the Gluck Equine Research Center at the University of Kentucky, whose research focus is parasite control in horses. And there’s no time to waste.

“Drug-resistant parasites are already a serious problem,” he explains. “They have been reported all over the world. And every drug on the market has some parasites that are resistant to it.”

Dr. Maureen Anderson, lead veterinarian for Animal Health and Welfare for the Ontario Ministry of Agriculture, Food and Rural Affairs, says, “Cyathostomes (small strongyles) are the primary concern with regard to drug resistance.” If they are present in large numbers, these parasites can cause weight loss or more severe conditions such as diarrhea, colitis, and hypoproteinemia, especially in the spring when large numbers of cyathostome larvae emerge from their encysted state on the wall of the large intestines.

The equine roundworm (Parascaris equorum), which is primarily an issue in young foals, is another parasite which is developing resistance. With foals, “it’s important not to let the parasite numbers build up, because of the high risk of obstruction when a foal with a heavy burden of parasites is finally effectively dewormed, and a lot of these large worms die at once,” explains Anderson.

Horses acquire parasites in egg or larval form while grazing. The adult parasites then take up residence (as “worms”) inside the horse’s intestines, absorbing nutrition from the food that passes through. That’s why veterinarians have encouraged horse owners to set up a parasite-control program, such as the standard, every-two-month system. When parasites become resistant to the medication, however, the treatment is not effective – and the horses may be at risk.

The Simple Evolution of Resistance

“The key to maintaining the effectiveness of dewormers is NOT treating all the horses, but rather treating the right horses at the right times,” explains Anderson. “And that means testing.” *

She points out that it’s normal for horses on pasture to have some parasites, and that in low numbers they are unlikely to cause problems for an otherwise healthy adult equine. Anderson says that about 20 percent of the horses in any herd shed about 80 percent of the parasite eggs. “The goal is to treat these high shedders and avoid exposing the parasites in the other horses to any dewormers at all if possible.

“Identifying the high shedders means that all the horses need to be tested using a fecal egg count, and the horses that are treated should be tested a couple of weeks later to make sure the treatment worked. This is called a fecal egg count reduction test.” In areas with cold winters, the most important times to do the testing and treating regimens are spring and fall.

Making the change to a more effective regimen, Nielsen acknowledges, is not easy. “We are asking horse owners to change from a simple parasite control system that has been used for years, to an approach that sounds much more complicated,” Nielsen says.

He suggests starting with one simple change: test your horses before and after de-worming. In his experience, that convinces horse owners that a change is needed. “I guarantee you will find resistance to some of the drugs by the parasites your horse has,” says Nielsen.

“Once the resistance is fully-established,” he adds, “it is just a waste of the product. You might be worming six times a year, but in many cases you are really only doing it twice a year, because the other four times the medication you are using is having no effect.”

Another big concern, according to Nielsen, is that there are currently no new anti-parasite medications being developed. Continuing to treat horses indiscriminately without testing and with a rotating series of drugs is likely to increase resistance.

Management Begins in the Field

With that in mind, Anderson points out “it is strongly recommended that a parasite management program does not rely solely, or even primarily, on drug therapy, as this could support the development of more drug-resistant parasites.” The first line of defence, she says, should be pasture management. Horse owners should ensure that feces are removed whenever possible, that the number of horses in the pasture is not too high (ideally two acres per horse), that the field is harrowed when necessary, and that new horses are not added to the herd without first being tested and treated for parasites.

She also reminds horse owners that just as overuse and misuse of dewormers has resulted in increasing prevalence of resistant parasites, “the misuse and overuse of antimicrobials [disinfectants, antiseptics and antibiotics] can lead to the same problem with bacteria. It is critical to use antimicrobials as judiciously as possible – only when absolutely necessary and under the direction of a veterinarian – if we want these drugs to remain effective for treating infections in both people and animals.”

* Fecal egg count tests are not expensive and run between $15-$40 on average. For correct manure collection practices for testing, see page 28 of the May issue.