Rising to the Occasion: Why is my Gelding Always ‘Dropping’?

Research shows that penile tumescence is very common in both stallions and geldings and many appear to find PR training quite stimulating. 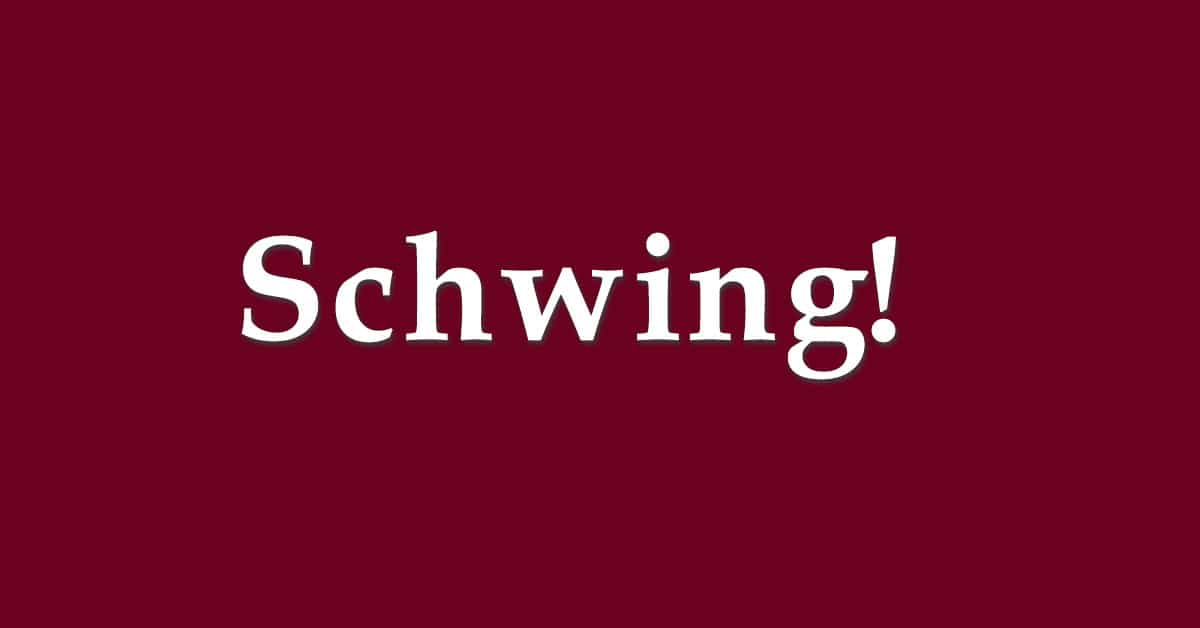 Is it intense relaxation? Sexual arousal? Frustration? Hyperarousal in anticipation of delicious treats? A combination of all of these things?

Is SEAM what it seems?

Research suggests that stallions spend quite a bit of their down-time erect. In a study of both younger and older stabled stallions, Tischner (1982) observed erection 7.4 times in 24 hours, a full erection 3.8 times and masturbation 4.1 times, for a total of 38 minutes every 24 hours, mostly in the morning, with a low point in the evening between 5:00 p.m. and 8:00 p.m. (perhaps when the stallions got home from work, grabbed a beer and parked themselves in front of the TV). Interestingly, the old boys showed just as much penile peppiness as their younger counterparts with no disinclination of SEAM as a factor of age.

Countering the belief that the high rate of SEAM observed in stabled stallions is due to inactivity and isolation from normal social and sexual interaction, equine behaviourist Dr. Sue McDonnell (2005) reported that stallions living in natural circumstances engage in SEAM with similar frequencies to that of stabled horses. One feral stallion masturbated four times per hour while teasing mares, bred every two hours, and masturbated as soon as one minute after ejaculation during breeding. Now that is a performance stallion!

McDonnell concludes that SEAM appears to be a normal and frequent behaviour in stallions and in geldings, reflects contentment rather than boredom or frustration, and should not be discouraged (2005).

Positive Reinforcement (PR) training, or clicker training, is gaining ascendancy in the equine world as a training alternative from traditional methods of negative reinforcement and positive punishment (see below). Recently, social media has seen numerous conversations about the association between PR training and penile tumescence.

Positive reinforcement simply means that behaviours that are immediately rewarded are more likely to occur in the future. If your horse is performing a behaviour that you want, or the first approximations of something you want, reward it, and you are going to see the horse trial this behaviour again. (For more on PR training click here). Clicker training is so named because it uses a small hand-held device that makes a distinctive click sound, although any consistent distinctive sound (bell, whistle, particular word, etc.) will work. By making repeated associations between a click followed by a reward, the horse soon learns that the click, means good treats will follow. This allows the trainer to more accurately mark the precise behaviour they want the horse to repeat, even when there is some delay between the desired behaviour and administering the reward.

In the only study to date on this topic, equine scientists Robin Foster and Sue Bennett surveyed 103 respondents (representing 120 geldings and stallions) and found that dropping was surprisingly common during PR training, with 80% of horses always or sometimes dropping. Horses that always or sometimes dropped were more likely to be trained with higher value (i.e. more delicious) reinforcers, and were horses with less PR experience. Horses that never dropped had trainers with more PR training experience who were also more likely to use lower-value treats, suggesting that there may be some association with penile tumescence, trainer and horse experience, and treat values (presented at the Progressive Equine Training and Behavioural Forum in Orlando, Florida in 2017).

Bennett is now working on her Masters Thesis at the University of Edinburgh with Dr. Robin Foster, research professor at the University of Puget Sound, looking at geldings’ behavioural responses (including penile tumescence) during PR training. She will be training 32 horses to touch a target, manipulating the type of reinforcer (high or low value) and the delay between click and reward (1 second or 8 seconds). She hypothesizes that high food value and a longer delay of reinforcement (that was evidenced in the less experienced PR trainers in her pilot study) will be associated with a horse’s higher emotional states of stress, conflict, and frustration, and that this stress would be evidenced by penile tumescence.

When I asked Bennett if she felt that dropping was necessarily associated with a negative welfare state she responded, “I actually think it could be a sign of frustration or a sign of relaxation and might vary depending on the training environment, trainer mechanics, training choices, equine life experience, and possibly even the relationship the horse has with the owner.”

For example, a horse could exhibit frustration if the owner is inconsistent or clumsy with their delivery and the treats are of high value. Alternatively, dropping could be a sign of relaxation if a horse who typically drops during an enjoyable massage or grooming session may also do so in an in-hand PR training which similarly involves touch and close proximity. 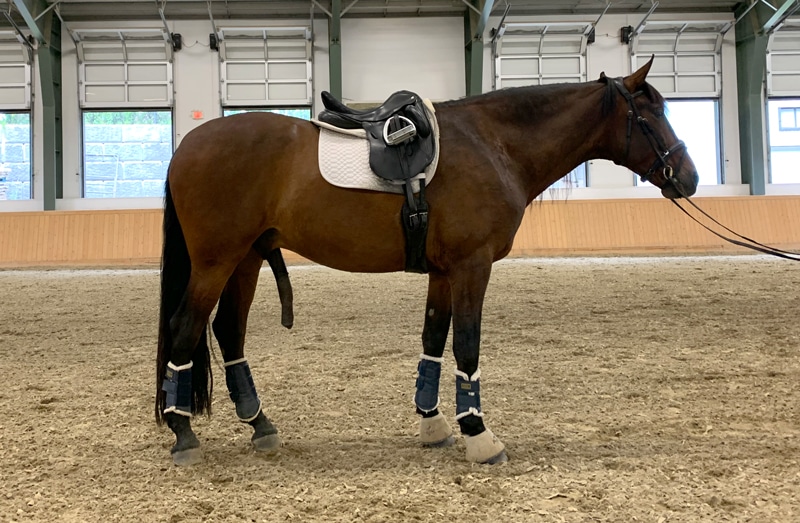 This gelding drops immediately after being ridden, reliably every time. But is it relaxation and contentment, or triggered by something else? (Photo courtesy Toni Henderson)

Bennett is also looking at the role of oxytocin, the so called “love hormone,” because of its association with mother/infant bonding, nursing, and social affiliation, and its lesser-known role as a stress mitigator. In studies with rodents, oxytocin plays a key role in every instance of penile tumescence. Bennett asks, “So the question becomes: for horses who display penile tumescence during PR training, is this a result of the ‘love’ function (physical contact or close proximity with a trusted other) or the stress mitigation function of oxytocin? We don’t know the answer to this yet.”

Master’s student Olivia Franzin, working with Dr. Katrina Merkies at the University of Guelph, is also exploring this association, undertaking a two-part study entitled “Why the heck is my horse erect?” Franzin will initially survey trainers who are using PR Training to examine dropping prevalence, how trainers interpret it, and how they manage it. In Study 2, Franzin will examine videos submitted by trainers of horses dropping during training and record frequency and duration of dropping, and other behavioural and environmental factors associated with penile tumescence.

Franzin is curious about the role of the dopamine pathway (associated with the pleasure centre in the brain). As she explains, during PR Training an action by the horse leads to a food reward that strengthens the sensory and motor neural connection through the release of dopamine. In studies with rodents, the activation of dopamine release has been seen to trigger oxytocin release, causing erections in male rats without the presence of a female. It may be that overstimulation of the dopamine pathway is causing the horses to become hyperaroused.

Alternatively, spontaneous erections have been cited in the literature as a comfort behaviour, and Franzin has considered that dropping may simply be a sign of relaxation. The parasympathetic nervous system operates when the horse is relaxed; it slows down the heart rate, allows urination, aids digestion, and also controls penile erections.

Yet another explanation has been proposed by Foster and Bennett who explain that penile tumescence may be accidentally conditioned as part of the behaviour being taught (2017). Let’s take the example of teaching your horse to stand: The horse stands briefly; you click and reward with a tasty treat. After a few sessions the horse, possibly aroused by the anticipation of food, or for any number of random reasons, becomes erect while standing, and you click and reward.

Unfortunately, you may be rewarding a behaviour you were not looking for – the “click-a-dick” problem, as Foster and Bennett coined it in their presentation. As Bennett comments, “The horse tells us what he has learned, and the lesson, unbeknownst to us, may have included penile tumescence.” In one study, horses that always or sometimes dropped were more likely to be trained with higher-quality treats; (right) Wally, one of Olivia Franzin’s research subjects, happily obliges with a dangle following PR training. (Photo courtesy Olivia Franzin)

The perils of being too cocky

Although research about erect penises has its lighter side, it is not a behaviour to be taken lightly. Both Franzin and Bennett caution that dropping may well be dangerous for handlers who misinterpret the horse’s emotional state. Bennett notes that trainers “need to consider accompanying welfare indicators like facial expression, treat-taking manner, and overall demeanor,” potentially reflecting frustration, anxiety or conflict. She advises that initial PR training, particularly for inexperienced trainers, should always happen with a barrier between the horse and trainer such as a stall guard, fence, or small enclosure.

Furthermore, incorrect assumptions about the motivations behind penile tumescence can have negative welfare implications for the horse. As Franzin notes, owners can easily overlook a horse’s frustration or stress by drawing human-centred conclusions about the animal’s emotional state. “Seeing a horse’s penis out, and thinking that the horse is enjoying themselves, is just one of the many ways humans anthropomorphize their animals … Welfare is multifactorial ‒ we cannot depict a welfare state solely based on a single behaviour”.

Bennett comments that right now “we have more questions than answers … Hopefully we will be able to use the scientific method to help identify what is actually happening and why, as well as recommend potential best practices.” I plan to keep in touch with both of these researchers to see what they find about what the boys have been trying to tell us. Watch this space.

Olivia Franzin is in the recruitment phase of her project which is fully online. Interested potential participants can connect to the study here.

~ Antonia J.Z. Henderson is a Research and Equine Psychologist living in BC