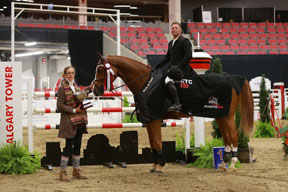 The Inaugural Royal West Tournament hosted the $15,000 Jump Alberta Western Canadian Young Horse Championships on Monday afternoon in the prestigious new indoor venue located at the Western Event Center in Stampede Park. The impressive group of young horses competed in two classes with ribbons to eighth place in both. In each round, horses were […]

The final day of the Developing Riders Tour concluded yesterday at the Royal West Tournament. Riders competed in a fun filled day of competition at Royal West’s brand new indoor venue located in Stampede Park in the Agrium building. The developing rider tour is heavily supported by RMSJ President, John Anderson, and his management team, […] The Final phase of the Royal West International Championship series concluded last evening with an exciting win for Venezuela’s Andres Rodriguez and Caballito. Securing the win in the $40,000 Kubota Canada & Tractorland Cup pushed Rodriguez to the top of the leaderboard and a silver medal podium finish in the series overall. Local favorite Tamie […] The second evening of competition at the Royal West Tournament ended in victory for Jill Henselwood and Quidam Blue in the $40,000 SynOil Energy Services CSI2* Cup. Thirty-Six horses competed in round one of the Cup class with fourteen jumping clear, making it to the second round jump off. Course designer Werner Deeg set a […] Jump Canada is pleased to announce exciting plans for national series championships and finals in 2014. After sending out a call to competitions to host the 2014 Jump Canada national championships and finals, the following locations have been finalized: The renowned Royal Agricultural Winter Fair in Toronto, ON has been chosen to host the Canadian […] Plans are underway for a major indoor horse show to take place in 2014 at the new Agrium Western Event Centre on the Calgary Stampede showgrounds in downtown Calgary, AB. The brainchild of John Anderson of Rocky Mountain Show Jumping, the Royal West will be a 10-day, multi-breed show. It will feature a division for […]
Page 4 of 41234
Latest News