The Dutch Masters revived the Rolex Grand Slam of Show Jumping which has been on hold since December 2019, with a new live contender. 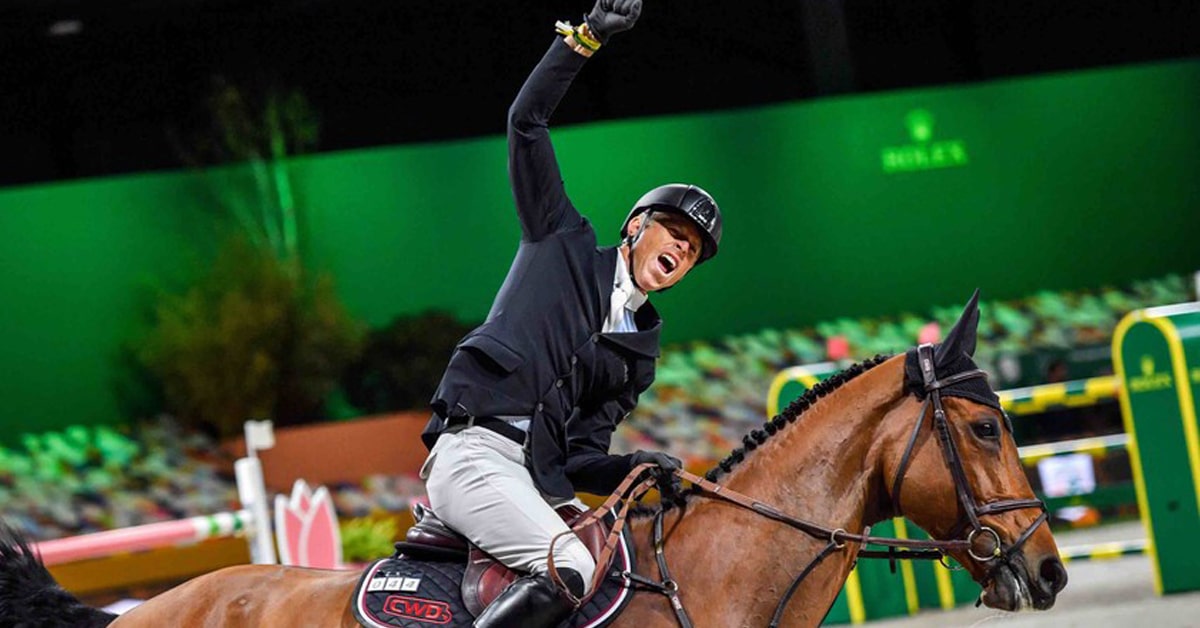 Three days of spectacular CSI5* international show jumping at The Dutch Masters culminated with the prestigious Rolex Grand Prix, the first Rolex Grand Slam Major of 2021. The equestrian world’s eyes were on 28-year-old Swiss Rolex Testimonee Martin Fuchs, who travelled to ‘s-Hertogenbosch as the Live Contender, following his Rolex Grand Prix win at the CHI Geneva in December 2019.

Partnered by his talented grey gelding, Clooney, Fuchs faced formidable opposition from a string of experienced riders, including fellow Rolex Testimonees, Scott Brash from Great Britain, American Kent Farrington, current world number one-ranked rider, Steve Guerdat from Switzerland, and Frenchman Kevin Staut. Other established names, such as the German trio Marcus Ehning, Christian Ahlmann and Daniel Deusser, US rider, Laura Kraut and Peder Fredricson from Sweden, helped to make up a truly impressive list of 42 starters from 15 nations, many of whom were more than capable of becoming the new Live Contender.

With Brash and his 12-year-old gelding, Hello Jefferson, and Farrington and his 13-year-old mare, Austria 2 both retiring, Fuchs and Staut each picking up eight penalty points, and many others failing to navigate the Louis Konickx-designed course fault-free, just eight combinations progressed to the jump-off – a seven-obstacle, 330m final test of ultimate skill, determination and precision.

First to go, Weishaupt set the early pace, jumping clear in a time of 33.71 seconds; however, his lead was short-lived, as Christian Kukuk and his 11-year-old grey gelding, Checker 47 went next, stopping the clock 0.14 seconds under Weishaupt’s time. With none of the following four riders able to better Kukuk’s performance, the Grand Prix’s fate lay with Modolo Zanotelli and Kühner. The penultimate partnership to go, Kühner and his 10-year-old gelding, Elektric Blue P set off at blistering pace, crossing the finish line over a second ahead of Kukuk, etching his name at the top of the leaderboard, where he was to remain after the 32-year-old Brazilian couldn’t quite find enough speed at the last fence, slotting into a very respectable second place.

Delighted with his performance, the new Rolex Grand Slam of Show Jumping Live Contender, Max Kühner, commented: “The Rolex Grand Slam has always been a big aim for me, so I’m very happy that it worked out today.

“I bought Elektric Blue [Elektric Blue P] when he was a two year old. I saw him do one free jump on a video, and I said I like him, and the auction was already running, so we bought him. He’s always done everything very well, he was always a very good horse, and he never disappointed me. He has unbelievable possibilities, as jumping is quite easy for him. He has a good character, and likes to do the sport. At home he gets bored quite easily, so we have a special programme for him. We hack him, and drive him to where he can climb a little bit in the mountains.

“Spruce Meadows and Aachen in September was already on my schedule. It’s still far away, but we will try to make a plan as early as possible. We will aim to take Chardonnay [Chardonnay 79] to Calgary, as he finished third in the last Spruce Meadows Grand Prix in 2019, where he jumped very nicely. And maybe we’ll take Elektric Blue to Aachen.”