Over the past couple of years, I have hammered on pretty annoyingly (to some) about the highly dubious objectivity of the FEI’s repeat

Over the past couple of years, I have hammered on pretty annoyingly (to some) about the highly dubious objectivity of the FEI’s repeated use of Lord John Stevens and his company Quest in its investigations into various and sundry scandalous situations which have primarily involved Endurance. Well guess what. Turns out I had a point.

Two weeks ago, the British papers were all fat-kid-on-Smartie over the news that Lord Stevens is being investigated by the Independent Police Complaints Commission (IPCC). According to a Guardian story from April 9th, “Former Scotland Yard commissioner Lord Stevens is to face an investigation by the police watchdog into claims that documents were not passed to the 1998 Stephen Lawrence public inquiry. The Independent Police Complaints Commission (IPCC) said it would launch an investigation, following a referral by the Metropolitan police itself. The documents are believed to relate to long-standing claims made by Stephen’s parents, Doreen and Neville, that corruption played a part in police bungling of the case. Stevens was deputy commissioner of the Met at the time of the public inquiry, which was chaired by Sir William Macpherson. As deputy commissioner, he oversaw the anti-corruption command. An IPCC spokesman said: ‘We can confirm we are independently investigating Lord (John) Stevens following a referral from the Metropolitan police.'”

Lord Stevens is known for his intimidation tactics, a trait to which we media in attendance at the 2013 FEI GA were treated when he more or less baldly threatened to sue any of us who bespoke badly of him. Both the Guardian and the Independent  articles about the Lord-sniffing ended with the same quote from Stevens, who has a habit of roaring like a bear being poked through zoo bars: “Step very carefully, I’m not putting up with any more crap about this.” 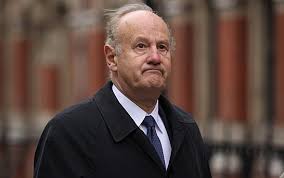 Dear John: I don’t believe you are in a position to declare that you won’t put up with any more crap. I think that’s up to the investigators to decide.

I’ll be keeping an eye on this one. In the meantime, I sure hope I don’t see the name ‘Lord Stevens’ cropping up in any more FEI press releases about investigations about corruption and cheating.