Yeast cultures in manufactured feeds is not new; a look at five of the top equine feed companies in Canada listed at least one product that has yeast. 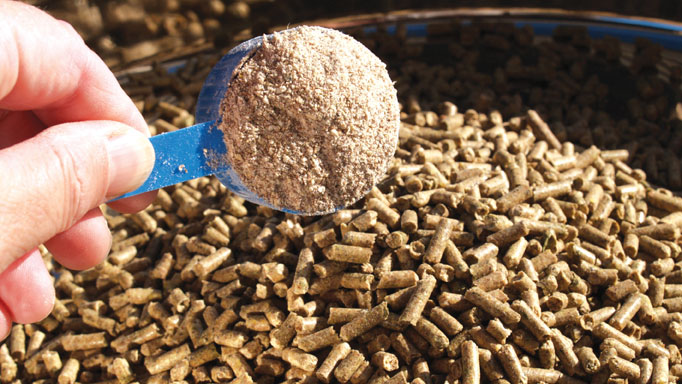 Yeast cultures are defined as the “dried product composed of yeast and the media on which it was grown, dried in such a manner as to preserve the fermenting activity of the yeast” by the American Association of Feed Control Officials. Probiotics is a broader term and may include bacteria or other microorganisms that are beneficial to the microbial population in the horse’s gut, while prebiotics are compounds that affect the growth or activity of microbial populations. In Canada, the Canadian Food Inspection Agency requires registration of “Viable Microbial Products” added into animal feed (different from supplements). Many feed companies include yeasts or other compounds as ingredients (feed additives) in their products. A look at the ingredient list will let you know if the product you feed does.

A number of research studies have investigated the effectiveness of several yeast species and compounds on digestibility in horses and their impact on microbial content. They found that their addition to equine diets – either fed as supplements or included within commercial feed products – resulted in modification of the microbial populations and improvements in digestibility of fibre, protein, and phosphorus. This results in the horse being more efficient in utilizing these nutrients, and some studies have reported associative effects such as increased average daily weight gain and improved feed-to-gain ratios in young horses.

In older horses where fibre, protein, and phosphorus digestibility is naturally decreased, yeast cultures may prove beneficial. This greater feeding efficiency is beneficial for performance horses, and improvements in digestibility have also been reported in horses being fed lower-quality hay. It is likely that horses fed a regular daily dose of a yeast culture may derive more benefit than a horse that is only supplemented occasionally.

It should be noted, however, that several studies have reported no benefits of feeding yeast cultures. The variation in research findings may be compromised by differences in study design, yeast compound and dosage used, and the life of the additive. In order for an ingested product to have an effect, it needs to survive and transmit through the stomach and small intestine before it reaches the large intestine. It should also be considered that research studies investigating the efficacy of certain products are often sponsored by the company that produces that product, so careful interpretation of the findings is important.

As with all supplements, there is some “buyer beware” caution. Most notable is a study conducted by Dr. Scott Weese at the University of Guelph, who found that numerous commercial probiotic supplements did not contain the organisms listed on the label. The CFIA does have more regulation over feed additives vs. commercial supplements, and all feeds are subject to testing. Therefore, in addition to being more effective due to regular daily consumption (vs. supplemental use), feed additives are also more regulated. That said, there may be differences in the yeast products themselves. A recent study found greater effects on digestibility from a culture called BiocellF53 vs. Procreatin 7 or Biosaf SC47, although all were species of S. cerevisiae.

The addition of yeast cultures to manufactured feeds is not new; a quick look at five of the top equine feed companies in Canada listed at least one product that contains yeast. Therefore, it is quite possible that you are already feeding it to your horses.