Many stable owners are incorporating more creature comforts into their tack room in addition to the practical functions of storing and cleaning tack. 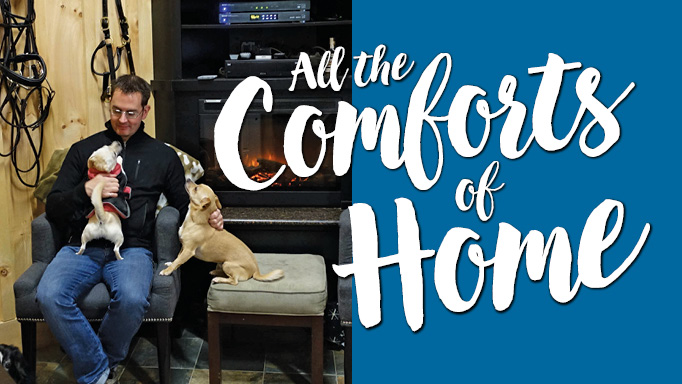 Home is not always where the heart is. If you’re a horse owner, yours is likely at the barn. Little wonder then that many stable owners are incorporating more creature comforts into their tack room in addition to the practical functions of storing and cleaning tack.

You’ll find wine fridges, kitchen facilities, stereos and flat-screen TVs, adjoining showers and change rooms, not to mention a sophisticated sense of style on par with the hottest interior design trends such as granite countertops and stylish light fixtures.

“Some have fireplaces, bars, kitchens, cathedral ceilings, in-floor heating, or air conditioning,” says Gary van Bolderen, owner of Dutch Masters Construction Services, a Barrie, ON, company that specializes in designing and building horse stables. “It’s all a matter of what people want to spend.”

A place to unwind

Kim Wynd and her husband Mike had a 10-stall barn and arena erected on their 97-acre BenWyn Acres in 2012. Their farm is home to nine horses, including Kim’s three warmbloods and boarders’ horses. The barn is designed to be as easy to maintain as possible, with excellent ventilation and two different exhaust systems to provide easy breathing for the horses and for Mike, who is allergic to hay and straw.

“I wanted a place where I could sit, have a glass of wine and hang out in the barn, as I knew how much time my husband and I were spending there,” says Kim.

Thus the 12 x 24 room tack room in the middle of the barn became a rustic retreat with all the comforts of home. At one end is a kitchenette with custom cabinetry, coffee makers, microwave, wine rack, bar fridge, and sink. It is topped with granite, as is the shelf that runs along the length of the window into the arena, where people can place their mugs or wine glasses as they watch riders school their horses.

At the opposite end of the room with its board-and-batten pine walls are comfy chairs and a sofa, coffee table with magazines and an entertainment unit that houses the television (with satellite channels) and electric fireplace. The fireplace is more for ambience, as the heated tile floor warms the room.

Saddles and bridles hang on open racks along the wall and in the middle of the room is Kim’s favourite piece – a tack cleaning station she bought from one of her former coaches that resembles an A-shaped wooden pommel horse. The well-worn piece can hold two or three saddles at a time, and fixed and pullout shelves have plenty of storage for saddle soaps and conditioners.

BenWyn is mainly a private barn with a few friends as boarders. Van Bolderen says private barn tack rooms tend to be more elaborate, as owners don’t have to be as concerned about having their things locked up as owners of boarding stables do. “In private places, it’s limitless what you can do and it’s a more residential look. A boarding place typically is more clinical and functional,” he says.

Although FoxFire Equestrian in Uxbridge, ON, is a boarding and training barn with 22 horses, its tack room is as fashionable as it is functional. Five years ago, farriers Dave Dawson and Barney Cummings bought the equestrian facility, where dressage rider and trainer Andrea Bresee operates her business. Dave’s wife, Tina, who had a flair for design and décor, took on the tack room as her project, although she hadn’t been involved with horses for years.

“I used to have Saddlebreds and was born into the Saddlebred world. When Dave and Barney bought FoxFire, the tack room was clean, but basically just an open space with concrete floor and plywood walls,” says Tina.

An old apartment in the barn had to be gutted to the studs and was used to create the new tack room. Working with Tom Lewis of Lewis Custom Homes, Tina scoured the internet for ideas and sketched her designs on graph paper. She designed the room to have open racks for saddles, with bridles tucked on hooks underneath, and with shelves for saddle pads above. Benches below the saddle racks serve double duty as seating and as tack boxes with hinged lids where helmets, boots and wraps can be stored.

A large centre island is the centre for socializing and tack cleaning and makes “a great buffet space” for parties, says Tina. It’s got stools where people can gather to socialize and the tack room also includes two bar fridges and a small kitchen. She felt that the traditional hunter green and burgundy colour scheme had been overdone in equestrian décor, so she opted for a contemporary palette of black and taupe. Since the renovation, her husband has also installed a woodstove to keep the room toasty in winter.

Three years ago, FoxFire was included on a local house tour, says Tina. “The house on the property wasn’t included on the tour. Just the barn and tack room.”

Form and function (and fragrance)

Gary van Bolderen says it’s quite common to combine a tack room with viewing area where people can watch the action from seating such as a leather couch while enjoying the scent of saddles and leather. Another great olifactory delight in the tack room is cedar and he’ll often line tack room walls with unfinished cedar boards to give the room the fragrant aroma of a cedar-lined wardrobe.

You want to have flooring that’s easy to clean, such as ceramic tile, he says, although he has installed wood floors specifically so they’ll get scratched and scuffed like an old barn floor. Interlock is another option. Some clients have even installed central vacuum systems for ease of cleaning.

Lockers are another tack room staple. “We have made cupboards out of hickory, pine, or oak, and it’s nice if you can have a full locker instead of a half one,” says Gary. He says you might also want to add closets for riders to hang their street clothes, and a place to shower and change.

Other considerations include seating for people to pull boots on and off, a sink to use to dampen sponges for tack cleaning, and enough elbow room for a group of people. “The tack room is where everyone gathers,” he says.

Soft lighting might look great in photographs, but it’s not practical for tack rooms where you want to be able to see what you’re doing, he advises. “Nowadays, LED lighting is the way to go. It’s more expensive up front, but the savings are tremendous and the light bulbs last forever.”