To Scrape, or Not to Scrape? Busting an Old Belief

New research out of Australia shows that removing cold water from overheated horses could actually make them hotter. 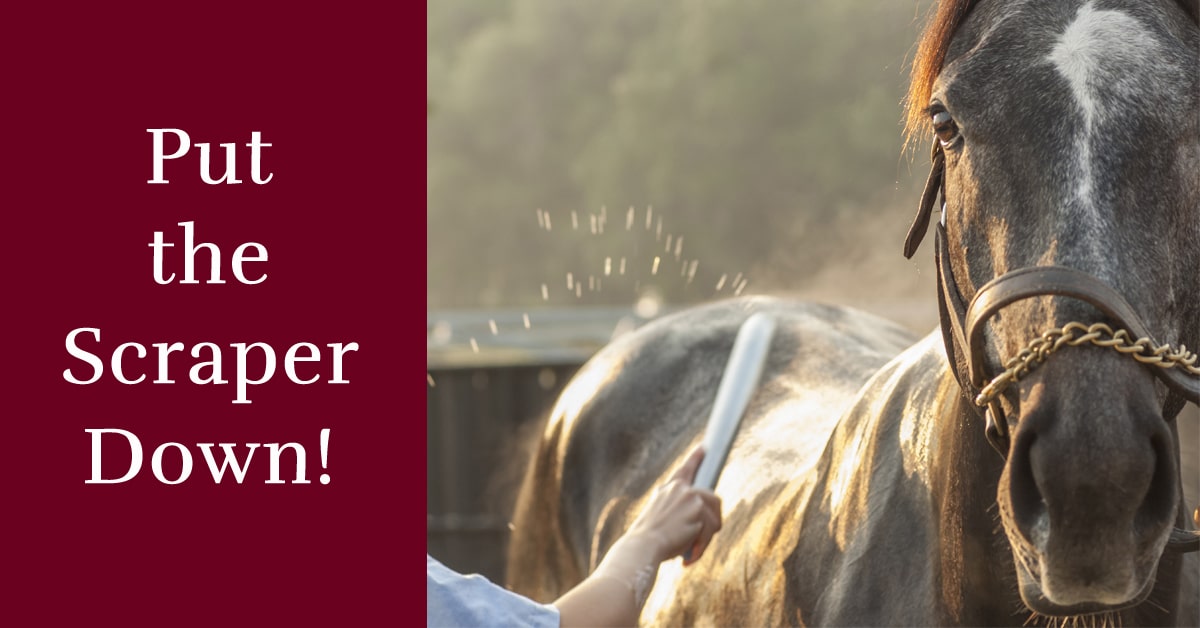 A study found there is no advantage to scraping off cold water that has been applied, especially when cooling distressed horses that are extremely hot and at risk of collapse, as it wastes time that could be better used to apply more cold water. (©Mark - stock.adobe.com)

You’ve showered your horse after a strenuous workout on a muggy summer day and reach for a sweat scraper to remove the excess water. You’ve always been told that water left on the coat will heat up and make the horse hotter.

Put the scraper down! There’s some debate as to whether this is the best course of action.

Science and veterinary department researchers at the University of Queensland in Australia set out to determine if scraping is, in fact, a necessary step in cooling down overheated horses. In 2018, the Fédération Equestre Internationale (FEI) stated at its annual Sports Forum: “There is no advantage to stopping to scrape off cold water that has been applied when cooling horses that are very hot and potentially at risk of collapse or distress. This simply wastes time that could be used to apply more cold water.”

Meanwhile, the policy for “caring for racing animals in extreme heat” in Queensland University’s own racing jurisdiction advises: “repeated application of cool water to the entire body of the horse, followed by scraping excess water.”

Exercising in hot, humid conditions can cause a horse’s body temperature to exceed the “comfortable range” of 37.5°C and 38.5°C and enter well into the 40°C range, said Kang. They may struggle to cool down and, if a high body temperature is prolonged, the horse is at risk of developing exertional heat illness (EHI), a serious condition that can lead to brain and nerve injury and multi-organ system failure.

Direct cooling using cold water is the easiest and most effective means of bringing down a horse’s temperature, said Kang, adding, “There is no scientific evidence to prove the cooling effect of scraping.”

For the study, five healthy, mature geldings were exercised on a treadmill once a week for three consecutive weeks. Sessions lasted 10 minutes, followed by a 10-minute cooling-down phase.

Three different cooling methods were evaluated on each horse:

2. Applying 30 litres of cold (6°C) water by bucket, repeating every minute for six minutes, then walking in hand for four minutes.

3. Applying 30 litres of cold water and immediately scraping it from the body every minute for six minutes, then walking in hand for four minutes.

After each 10-minute cooling-down phase, the horses stood for 40 minutes.

The collected temperatures were then statistically analyzed.

The above graph shows the central venous and rectal temperatures during exercise (vertical orange bars) through each phase of the three cooling methods. (Hyungsuk Kang, Queensland University).

Kang and colleagues found both cold-water application methods reduced the horses’ temperatures more than walking only. And, between the two cold-water methods, “significantly” lower body temperatures were observed when the water was left on the body than when it was scraped off (central venous -0.91°C, and rectal -0.31°C as compared to central venous -0.84°C and -0.29°C, respectively.)

Looking solely at the central venous temperature for instance, it continued to drop for five to 10 seconds after water application before starting to increase. When the water was scraped, the temperature increased immediately.

The temperature reached normal range and stabilized after the fifth cold-water application.

“So, there’s no cooling effect of scraping following rapid cold-water application,” said Kang. “This means heat dissipation by conduction – from the inside of the body to the water on the skin – is more effective in reducing body heat than sweat evaporation.”

They also found with both cold-water methods, the cooling effect on the central venous temperature was three times greater than what was recorded rectally. Therefore, where you take the body temperature measurement during and immediately after exercise is important as well.

The take-home message, said Kang, is to keep reapplying cold water for the first five minutes after exercise on those steamy summer days. This will reduce your horse’s core temperature and minimize the chances he will be affected by EHI. Kang does note, however, that the study was undertaken in an indoor environment and “water temperature, timing of water application, scraping [methods] and different climate conditions may affect the result.”