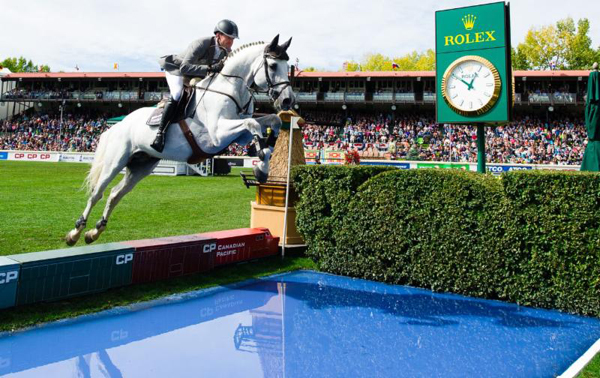 Fans of show jumping, fans of any sport, were completely captivated by the level of thrilling competition today for the CP International, presented by Rolex. Philipp Weishaupt of Germany took home the title and million dollar championship cheque, before a capacity overflow crowd, after a stupendous double clear performance in what is accurately described as the most challenging two-round grand prix in show jumping.

Riding LB Convall, a 10-year-old Holsteiner stallion, Weishaupt rode the impressive grey to an astounding victory, just as he did back in July 2016 at the Rolex Grand Prix of Aachen. This year’s win once again puts the young German star into the running for the Rolex Grand Slam of Show Jumping. As the only athlete to finish on a double clear score card, Wieshaupt had this to say about the Leopoldo Palacios designed course. “To be double clear here, in this grand prix, the two rounds are known as the toughest, but already this week I had a really good feeling on Convall – I had even told McLain I feel like I am in really good shape for Sunday. The horse was just outstanding, I am super honoured to be able to ride him. It’s so much fun you can’t believe it.” He continued, “With many of the challenging lines on course including both triple combinations from round one and two, Convall jumped it like a gymnastic – he just has so much talent.”

On her first trip to Spruce Meadows, Luciana Diniz of Portugal earned a silver medal in today’s coveted event and after a fantastic week she felt good energy was surrounding her. It was a fight to the finish for Diniz and Fit for Fun but with the last rail down, the gold medal was just not in the cards. Diniz commented, “I must say it was completely my fault, I changed my strategy when I walked the course. I was planning on doing 5 (strides) down the final line and then I saw many people were doing four because the time was so short; after watching Philipp, I decided I would do it. But anyway, I am just so happy to be here and it was really meant to be Philipp’s day today.”

Finishing in the bronze medal position was American veteran McLain Ward aboard the great HH Azur, an 11-year-old Belgian Warmblood mare. Ward mentioned, “One of my goals this year was the CP ‘International;’ we really tried to plan and build for it. I showed her quite casually early on this week to prepare for this – so these horses came into this quite fresh and that’s what you need for the biggest jumping in the world.” He continued, “I was just thrilled with her; she jumped a brilliant first round, I made a little mistake to the last line and she helped me out. Both combinations in the second round were very difficult for my horse, they were very short and I knew that was going to be an issue. In the first combination I was able to add the stride, but in the second combination I was able to actually give Philipp the good advice to add the stride!”