Plans are underway for a major indoor horse show to take place in 2014 at the new Agrium Western Event Centre on the Calgary Stampede showgr.... 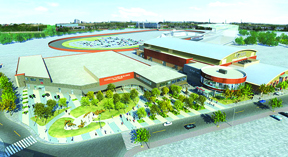 Agrium Western Event Centre complex, which is currently under construction with a projected completion date of June, 2014, encompasses 150,000 sq. ft. of agriculture showcase and competition venue.

Plans are underway for a major indoor horse show to take place in 2014 at the new Agrium Western Event Centre on the Calgary Stampede showgrounds in downtown Calgary, AB.

The brainchild of John Anderson of Rocky Mountain Show Jumping, the Royal West will be a 10-day, multi-breed show. It will feature a division for international show jumpers, national hunter/jumper classes, hackney and heavy horse classes, and a multitude of other events including indoor eventing, terrier racing, barrel racing and even mutton-busting – “a full evening of entertainment built around the horse,” according to Anderson. He explains the inspiration behind this project. “I grew up here and made my open jumper debut in 1984 in the Atco Cup at the Calgary International Spring Horse Show in the Stampede Corral. There was a circuit, and they were really fun events right in downtown Calgary.

“I’ve always wanted to do something like this,” he continued, explaining that riders in the West cannot always travel east to the Royal Winter Fair because of the expense involved. “I would guess that in the last 10 years the competitors from BC and Alberta would number not more than 30 per year.” His vision includes hosting the CET Medal Finals (introduced by his mother, Barbara, 25 years ago) at the Royal West in 2014, perhaps alternating yearly with the Royal, and possibly the Canadian Show Jumping Championships at some point.

The Agrium Western Event Centre complex, which is currently under construction with a projected completion date of June, 2014, encompasses 150,000 sq. ft. of agriculture showcase and competition venue. The 250’ x 125’ arena floor is the “largest of its kind in Canada,” said Anderson, and with seating for 2,500, “we can pack the house every night.” Housing for horses includes 400 box stalls immediately adjacent to the arena, plus an additional 1,200 stalls on site, wash bays, a large outdoor covered area, and a 20,000 sq. ft. multipurpose space for warm up, a trade show or exhibition hall.

Max Fritz, director of Agriculture for the Calgary Stampede, told Horse Sport, “The new Agrium Western Event Centre will solidify Stampede Park as one of the most unique agricultural showcases in the world. It will be a centerpiece for agricultural education, exhibition, and industry in southern Alberta…truly a lasting connection between urban and rural.”

Fritz is excited about the prospect of a major horse show at the venue. “The design of the new Agrium Western Event Centre is attracting the interest of a variety of equine disciplines.”

Anderson said there is a lot of buzz among potential sponsors already, and he expects to be able to offer a minimum of $200,000-$300,000 in prize money the first year, “pretty remarkable for an inaugural event.” Participants will have to qualify, and the show will be “a show jumping tournament with the true standards of the sport – hunters starting at 3’ and jumpers at one-metre-ten – no lower,” insisted Anderson. He concluded, “We’re building the sport from the ground up, encouraging participation from across the country, and we will host it in true Western fashion!”

The Royal West will take place Oct. 23 – Nov. 1, 2014; more details will be released as they become available.