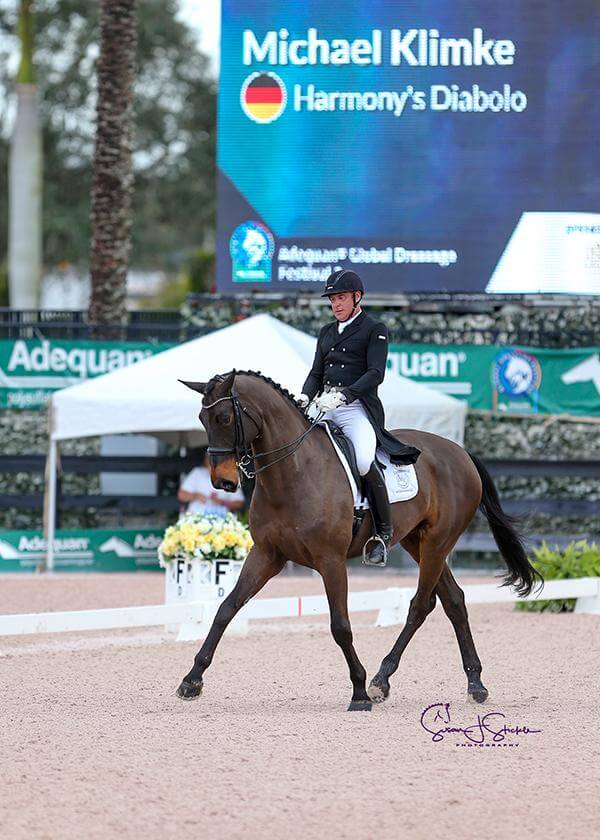 The Adequan® Global Dressage Festival (AGDF) finished its first week of competition at the Palm Beach International Equestrian Center in Wellington, FL, with a win for Michael Klimke (GER) and Harmony’s Diabolo in the FEI Intermediate I Freestyle CDI3*, presented by Triple Crown Nutrition.

Klimke and Harmony’s Diabolo, a nine-year-old Hanoverian gelding by Desparadis owned by Harmony Sporthorses, won the FEI Intermediate I Freestyle CDI3*, presented by Triple Crown Nutrition with a score of 73.425%.

Klimke said, “I was very happy today, actually all three days with Harmony’s Diabolo. I’ve had him since he was six, and I really think his highlight is [strength mentally, with] the nerves; he’s totally rideable. The gaits are good, and the highlight at the end is his availability for piaffe and pirouettes. He can really sit.”

Looking forward, Klimke said that “[his] plan with Harmony’s Diabolo is he goes another small tour in two weeks, then I take a break, and then I will ride him in Intermediate II.”

After AGDF, Klimke returns to his hometown of Münster, Germany, “the capital of the Westphalian Horses.” “My aim is when I come back to Germany to see that he goes in the Young Developing Grand Prix. He’s ready for it,” he said.

Klimke commented, “[Diabolo] is really one of the few horses I’ve had in my life that is in the ring exactly the same ride outside. When you make no mistakes, he makes no mistakes.”

Earlier in the day Ashley Holzer (USA) and Valentine, a nine-year-old Oldenburg mare (by Sir Donnerhall) owned by Holzer, won the FEI Intermediate I CDI1* with a score of 70.588%.