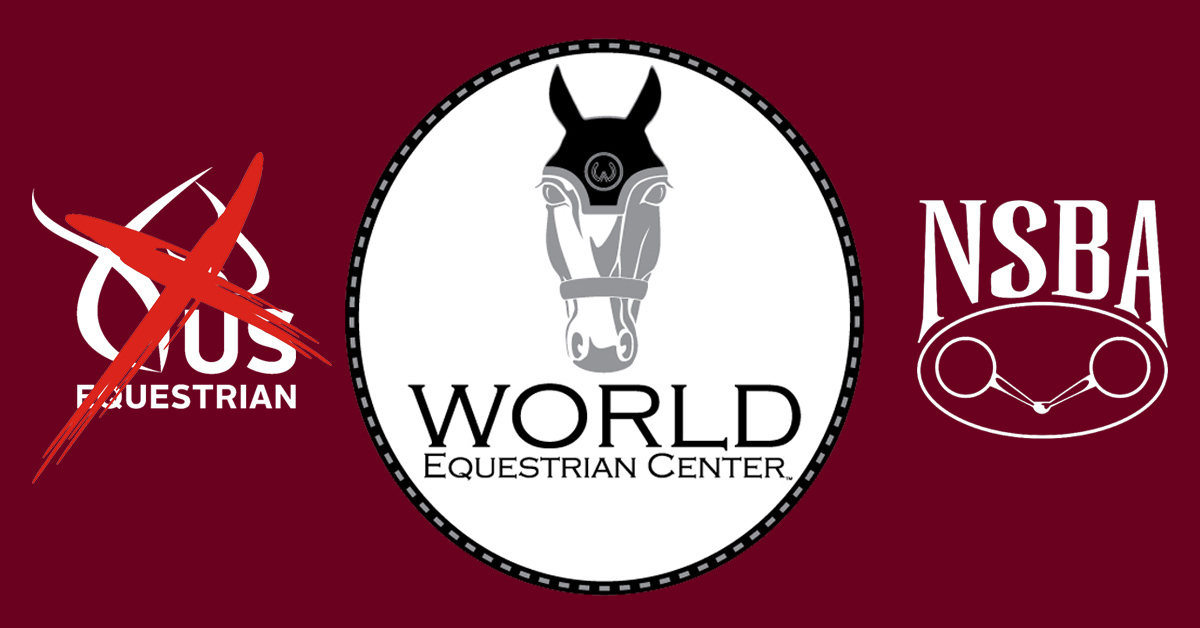 The U.S. Equestrian Federation today announced it has rescinded the show licenses it awarded to the new World Equestrian Center in Ocala for its 2021 “Winter Spectacular,” leaving the lavish facility with a 12-week schedule offering $4 million in purses and prize money–as well as free stalls–under the auspices of the National Snaffle Bit Association.

In a letter to USEF members, CEO Bill Moroney stated that combining USEF and NSBA shows in the same 12-week series “is confusing to participants and officials, and most importantly, jeopardizes horse and human safety and welfare,” adding that under the circumstances, “USEF has no choice but to withdraw” the licenses.

The FEI had given permission to WEC to offer two recognized shows in January and hold the USA’s only Nations Cup that is a qualifier for the autumn finals in Barcelona. No other U.S. facility made a bid to stage that competition, but USEF “will not be granting a license” for it and said the FEI will make the final decision on the event.

WEC is eight miles from the HITS showgrounds, where competitions have been run for years, which meant WEC’s request for 12 weeks of shows created a mileage conflict under the licensing rules. WEC chose to apply for competition approval through the mileage exemption process.

Roby Roberts, whose family built WEC, was puzzled by the USEF reference to safety, noting there have been no major incidents in connection with shows at the WEC facility in Ohio.

The mention of safety goes back to 2012, when an FEI rule was introduced making FEI athletes, horses and officials ineligible to take part in a sanctioned international or national competition within six months after participating in an unsanctioned competition.

As FEI general counsel Lisa Lazarus explained at the time, “the FEI has no way of safeguarding the welfare of horses and athletes participating in such events, or of protecting the integrity of the events. The same may be true at the national level if a national event is conducted outside national rules and with the express objection of the National Federation.”

The USEF letter states that it has notified FEI that the WEC shows are unauthorized and adds, “Presumably, the FEI will also decide whether it will apply its unsanctioned event rule.”

The FEI has taken note of the USEF position on WEC and will discuss the matter at its board meeting next week.

The WEC venue is unique, with a stadium, climate-controlled indoor arenas, a cross-country course and a 5-star hotel on the premises, along with shopping and restaurants served by a culinary staff of 180. In an exclusive interview with HorseSport.com, Roby wouldn’t confirm rumors that the facility cost more than $500 million, simply saying that to his family, “it’s priceless.”

Despite the loss of the USEF dates, he said there are no plans to sue the federation.
“What we’re fighting for is just to leave us and the members alone. Let the members do what they want,” he said.

Of the USEF, he added, “I think they’re looking at it wrong. I would look at it as bringing more people into the sport and have them have an option. Then both would grow.”

He noted WEC needs to run a full complement of 12 shows. “We can’t survive on three shows,” he commented, adding that a USEF offering of B shows wouldn’t work because the facility was built for AA shows.

While he did note that for competing in an unsanctioned show, “They could possibly suspend you. You’d have to go before a tribunal. But there’s never been a mass suspension across the board. Before they suspend anybody, I think they would look at, `Did you go to a safe horse show, who is it run by, who’s the federation.’”

In terms of the Nations Cup, he said, “I look at that as doing something for the industry.” Although it would have been costly for WEC, “We would love to put it on and we would have done an amazing job to showcase the U.S. in a way that would be good for the United States. I think it’s crazy they’re taking that away from all the FEI people. It doesn’t make any sense to me.”

Citing “a show of good faith and effort to work with the Federation,” Roby said, an updated schedule and prizelist to be released by Nov. 16 will offer $4 million in prizes and prize money, with the difference made up by free stalls (not including tack or equipment) and spreading prize money throughout the different levels of showing, rather than on specific classes.

The changes mean that $250,000 originally slated for a grand prix in week 12, which would have conflicted with HITS $1 million grand prix, will not be offered.
Does he think there’s a chance that WEC and USEF will ever be able to get together?

“Our door is always open,” he said. “We’re never going to burn a bridge. We’re looking at this as a long-term plan for the horse community as a whole.”