When I opened the June issue of Horse Sport the other day, the v

When I opened the June issue of Horse Sport the other day, the very first item that caught my eye was the news that Breyer will be creating a Valegro model to be released early next year. I was immediately excited at the prospect of a Breyer Valegro. You see, Breyer and I go back a long, long way.

As a child and early teen, I was an avid, maybe even rabid, collector of Breyer models. It all started when my mom built an equestrian centre the winter I was nine. My mom was a great believer in teaching me the value of earning money from an early age, and as I got older I graduated from putting grain in feed buckets eventually to the full meal deal of evening chores, including bringing in the horses. The very first thing I remember ever buying with my wages was the Proud Arabian Stallion Breyer model (in mahogany bay). I loved that model more than any stupid old Barbie doll whose legs didn’t spread properly to sit astride the Breyer model, and was therefore useless to me. This was during my brief stint in the Brownies. For some reason lost to time, I had decided to pursue the achievement of a knitting badge. My creation was, of course, a knitted blanket for my Proud Arabian Stallion.

I can’t remember if I ever got the knitting badge;  I managed to become Sixer of the Sprites before being invited to leave the Pack due to insubordination, or subversiveness – possibly both. But I got a lot of use out of that horse blanket. 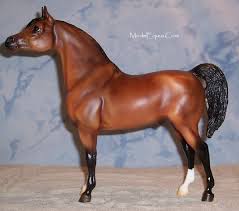 I loved my Proud Arabian Stallion so much that I blew an entire roll of film taking pictures of him with my Instamatic in the natural surroundings of the barn lawn. Before long, I had begun adding to my herd at a good clip. I would put half my monthly earnings into a savings account, and use the other half to save up and purchase more Breyer models from the toy store at the mall. By the time I stopped adding to the collection I had at least a dozen of them. I had the bay Arabian foal, Man O’ War, the Paint horse, the Appaloosa (I’m thinking it must have been the only one the store had that month), and the Polo Pony. The Polo Pony was a bold departure for Breyer, because it was in motion, a full gallop no less. The sense of motion and energy contained in the Polo Pony made it such a favourite that I eventually broke all its legs with vigorous play.

My very favourite Breyer model was the last one I purchased. It was called Foundation Stallion (black). It was always a mystery what foundation the stallion belonged to, but I didn’t really care. There was something very pleasing in his round, smooth lines, and swan neck (little did I know as a  12 year old how hard a long neck like that is to keep in front of the aids). I liked the Foundation Stallion so much that when I moved to Vancouver to go to university, he was the only Breyer model to go with me. I knew it was beyond kitschy and well on the way to tacky to have a plastic model horse as a decor item, but I was very attached to that one. I think I might still have him somewhere in a box in the garage.

So, yes I was pretty thrilled to learn that Valegro would soon be immortalized by Breyer. That is, until I looked up some photos of their newer models. First of all, many of them look shellacked, as if they were dropped into a bucket of Varathane, or possibly liquified Saran Wrap. Even Arab people can’t get a shine like that on a living horse. It would appear that Breyer’s mandate to create realistic replicas of the real thing has been usurped by the belief that shinier is better. Breyer has made models of a number of famous horses, including Totilas.

Apart from the fact that the model’s physical appearance is more like a Mini Me My Little Pony than the actual Totilas, also unlike the original horse is the fact that they didn’t break the mold after he was created. You can find the exact same model in a variety of colours, including a spotted one,  a blue roan paint, and a dapple grey.

The Hickstead model doesn’t look ANYTHING like the horse. 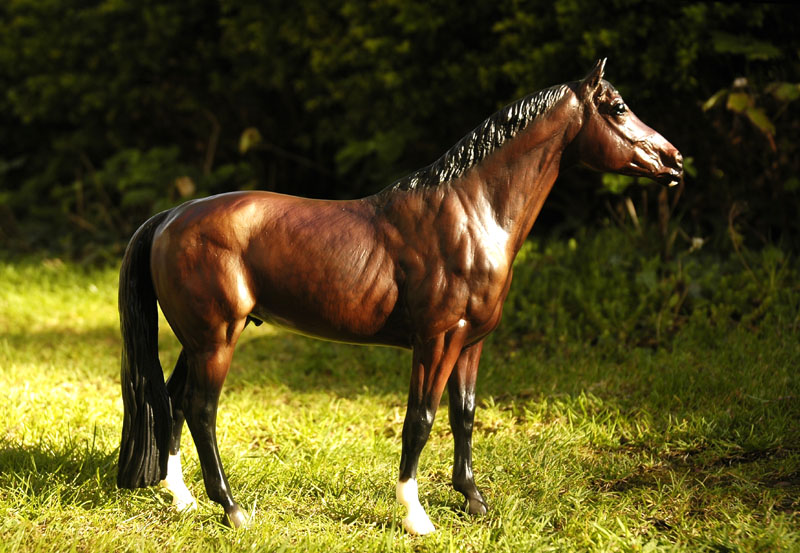 Hickstead was a sexy looking stud, but he was not a ‘pretty boy’ with a dished face. And so, I find myself quickly reining in my enthusiasm for the impending Valegro model. I’ll await the release of the Breyer Valegro with interest, but I’ll be very surprised if they get it even close to right. If they haven’t started working on the mold yet, here are a couple of tips for the plastic sculptors at Breyer: his head is quite big (but pretty) in proportion to his neck, which is quite small (but shapely); don’t forget the white belly patch; and please, please, PLEASE  reproduce him doing either extended trot or a flying change. The horse hasn’t been born yet that executes those movements better than Blueberry.