A 2013 University of South Carolina study suggests that 42 per cent of female collegiate equestrians are at risk for disordered eating. 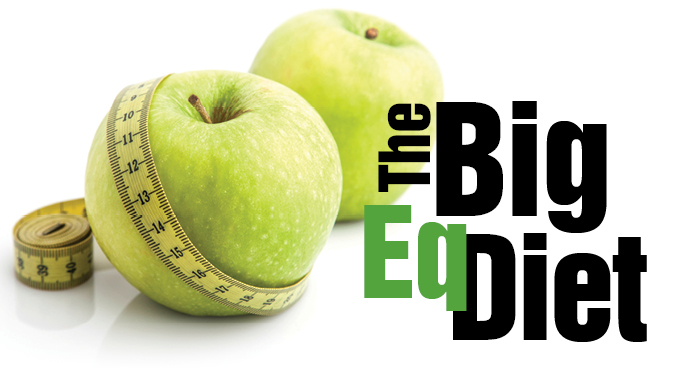 Unlike many of her fellow competitors in the A-circuit hunter and equitation divisions, Santana Wright never felt pressure to be rail thin. That’s why her ire was raised by comments from a well-known U.S. coach at the end of a young riders’ clinic a couple of years ago. The clinician who, according to Wright, “had nothing but great things to say” about her riding, stated in his wrap-up that to reach the top, a rider needs to be in good shape and that can’t happen if they are more than a size six.

“I was the only rider in the clinic who was larger than that,” recalls Wright, 24, originally from Port Hope, ON. “I was angry that I was singled out and I lost respect for the clinician.”

Wright considers herself a true athlete, having played high school rugby, volleyball, and track and field in addition to riding competitively since the age of 10. She also attended South Dakota State University from 2010 to 2014 on a National Collegiate Athletic Association equestrian scholarship, where she set many records and took home several MVP honours.

“For him to say that you couldn’t be physically fit unless you were small, well, I knew that not to be true. I’ve always been proud of my curvy, athletic physique,” says Wright, who continues to compete and works as a manager for private barn owners.

A long-held convention in the hunter and equitation divisions is that riders should fit a certain physical mould – tall and thin – to create the best impression before the judges. In Hunter Seat Equitation, first published in 1971, legendary horseman and equitation guru George Morris wrote: “I recommend to about a third of my riders to push away from the dinner table. A fat rider is definitely behind the eight ball! Rarely can someone be too thin for this sport unless he be emaciated and weak, which isn’t often the case.”

This opinion seems to still hold true in some segments of the horse world even 45 years later. Online forums, blogs, and social media platforms are rife with personal stories about struggles to become show-ring thin and the demands meted out by judges, trainers, barn mates, clinicians (reportedly including Morris to this day) and even parents.

A 2013 University of South Carolina study published in the Journal of Athletic Enhancement suggests 42 per cent of female collegiate equestrians are at risk for disordered eating (abnormal or harmful eating behaviours used to lose weight or maintain an abnormally low weight). “Overall, participants perceived their body images as significantly larger than their actual physical sizes and wanted to be significantly smaller in both normal clothing and competitive uniforms.” It also suggested public weigh-ins, comments about physique, and subjective judging at competition “magnified the pressures of pursuing sport success.”

Wright says she’s aware that other colleges enforced weigh-ins, but her team focused on fitness, not physical appearance. “We were encouraged to eat healthy and the team worked out intensely three times a week in the athletes’ centre,” she says. “I never felt pressured to lose weight or to be a certain size.

“Although none of my close friends ever had an issue, I do know that there were many young girls on our circuit that really stressed out about their weight,” Wright added. “The judging is subjective and the judges definitely like a certain ‘type’ of rider appearance. This puts a lot of pressure on young girls to make themselves long and lean to be more competitive.”

Most judges are “very careful” to pick winners based on performance, counters Ontario’s Laura Kelland-May, Equestrian Canada competition coach specialist senior judge and steward. “I don’t ever recall thinking, “Oh, too bad that rider isn’t prettier, she could have gotten a higher placing,’ or ‘My, if she were 20 pounds lighter she could have placed better,’” says Kelland-May, also a United States Equestrian Federation R-level hunter, jumper, and equitation judge. Instead, she wonders if winning is too often the trainers’ focus instead of developing horses, riders’ skills, or coaching. “There’s an ideal picture in the mind of a trainer and that ideal picture includes a rider who is thin.”

Also hugely culpable are mainstream and equestrian media, both traditional and online, which bombard audiences with ubiquitous images of “ideal” body types, creating an unrelenting and often unrealistic goal for media-savvy young equestrians. Lacking Wright’s confidence and self-esteem, some riders become obsessed with thinness and are so desperate to drop pounds, they resort to extreme measures.

One such weight-loss fad is what many young riders almost lovingly called the Big Eq Diet. Derived from Big Eq – a term coined to describe U.S. equitation divisions that culminate in prestigious events like the Maclay Medal – this so-called diet is all about eating very little to nothing to lose weight fast and keep it off for competition. Often used ironically, the hashtag #bigeqdiet is popular on social media, but for many riders it’s an all-too-real practice that can lead to some serious and life-long physical and emotional problems.

P is for Perfection

Holly Heartz is a rider and registered dietician from Fredericton, NB, who has earned an International Olympic Committee sports nutrition diploma and is currently a PhD candidate focusing on equestrian nutrition. She says restrictive dieting such as the Big Eq Diet can – but doesn’t always – lead to clinically-recognized eating disorders such as bulimia, anorexia nervosa, and binge eating.

“Overcoming an eating disorder is a long, difficult – and a lot of times unsuccessful – process. A lot of these people live with it for the rest of their life,” says Heartz. In fact, according to the Toronto-based National Initiative for Eating Disorders, they have the highest mortality rate of any mental illness.

The Canadian Association for the Advancement of Women and Sport and Physical Activity (CAAWS) notes that participants in “endurance, esthetic and weight-dependent sports are particularly vulnerable to eating disorders.” Counted among those sports: gymnastics, figure skating, wrestling, and equestrian. Some experts suggest certain personality types that are attracted to activities where standards of appearance, perfection, and control are paramount are also predisposed to eating disorders. Others, however, believe the milieu surrounding the sports themselves breed such problems. It’s reasonable to accept both are true.

Focus on Nutrition and Fitness

Regardless, Hertz wants to see sport-related body weight myths dispelled. “That thinner is better. That every sport has that ideal body weight so you have to fit this mould. And it doesn’t matter how you lose the weight, as long as you lose it. Those are big myths that can really impact performance.”

She also says equestrians, especially youth, must consider what they’re eating and how it affects their riding. A recently released joint position statement by The Dieticians of Canada, the American Dietetic Association, and the American College of Sports Medicine reads, “physical activity, athletic performance, and recovery from exercise are enhanced by optimal nutrition.”

That goes for riders, too, says Heartz, stressing the importance of a balanced diet. “There aren’t many equestrians looking for the service of a dietitian to improve performance. Most of the attention is on the horse’s nutrition. There needs to be more awareness that the nutrition of the human athlete makes a difference as well.”

Likewise, both Wright and Kelland-May stress physical fitness is the route to becoming the best rider you can be, regardless of size. “Riders have to put more effort into their own fitness so they are not a detriment to their horse’s performance,” says Kelland-May. “It’s a sport. Riders and horses need to be treated like athletes, and coaches need to understand that nutrition and fitness is an important part of the rider’s regimen. It’s not just about developing skills and drills to prepare the horse for competition, but rather preparing the horse-rider team for the sport. The competition is the test or proof of the training.”

Asked what advice she would give if one of her young students was overly concerned about weight, Kelland-May says she would instead have the student focus on riding goals and their horse’s skills. “A good performance on a well-trained horse will out-win a thin rider on a bad jumper any day.” Another piece of guidance? “Be confident in yourself, because your horse really doesn’t care how thin you are.”

Big EQ diet Symptoms
Do you suspect a rider you know is at risk of developing an eating disorder? Here are some clues:

• feeling out of control

Muscle Matters
Underweight equestrians might not have the physical strength and mental wherewithal to ride effectively and safely, says show jumper Sandra Sokoloski, who co-owns Summit Sport Physiotherapy in Okotoks, AB, and E-Sport Physiotherapy, specializing in rider posture and body awareness. “If you want to be a responsible and effective rider that is able to communicate clearly with your horse and manage any of the unexpected things that horses sometimes do, you need muscle,” she says.

It also means there isn’t as much glycogen stored in the muscles. Without this quick energy supply for the body, muscle fatigue happens quickly. The brain needs glucose to function as well. “If blood glucose is low there may be an impaired ability to think on the spot, remember a pattern or course, and make sound judgement calls.”

Sokoloski stresses that responsible athletes aren’t ‘skinny.’ “A fit, lean body is far healthier than a skinny one,” she says. “You are what you eat and if you don’t eat enough to be strong and keep your muscles working, you can’t train or ride your horse enough to expect them to compete. You owe it to your horse to be the best you can be.”

How Coaches Can Help
Coaches can play a significant role in helping young riders develop strong self-esteem and body image. Here are some practical suggestions to guide coaches (and others) in moulding healthy, fit equestrians.

• Praise for skills and successes, not appearance or weight loss.

• Involve registered dieticians in training and show planning discussions to provide healthy eating advice. “Most kids don’t listen to their parents, but will listen to experts in food and nutrition,” says registered sports nutritionist Holly Heartz.

• Be aware of the signs and symptoms of eating disorders.

What to do if an eating disorder is suspected:

• Act quickly. The shorter the time between the disease’s onset and the start of treatment, the better chance for recovery.

• Take the student aside in a private setting. Bulman advises choosing “I” statements versus “you.” For example, “I’ve noticed you’re not eating the same way you used to.” Leave it open to see if they respond.

• Reassure the individual that their position within the barn group or team is guaranteed.

• Don’t nag, bribe, threaten, or manipulate. “These tactics don’t work,” says Bulman. “Most people with eating disorders have tried repeatedly, and failed, to correct the problem on their own. Failure is especially demoralizing to athletes who are constantly oriented toward success.”

• Encourage the student to seek treatment.