It was a cold day when Dr. Larry Butler of OVLAC arrived to x-ray Sunny, but by employing a tiny heater and working quickly he managed to get the images 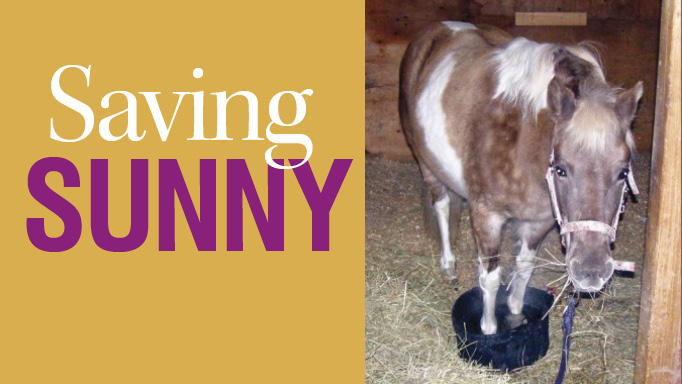 Christmas preparations were already underway last December when I looked out the window and saw our sweet 14-year-old paint pony Sunny Princess, who we had owned for a year and a half, with her left leg stuck out at an awkward angle. For days the weather had been terrible and the ground icy, and I thought with horror that Sunny must have had an accident and broken her leg.

I pulled on my winter clothing and ran out to Sunny, discovering with relief that her leg wasn’t broken after all, but that she had long ice cones under both front hooves, the longest being on the left. I got a small hammer and carefully removed the ice from her hooves, and then led a very lame Sunny Princess into the barn.

Luckily our farrier, Adam Ellens CF (certified farrier), was coming soon to trim the horses’ hooves. While I assumed Sunny had pulled a muscle and that was why she was reluctant to move, Adam suspected she had laminitis and had probably iced up on the front hooves because of shifting her weight to the back. Both my veterinarian and Adam had mentioned she might have had mild laminitis in the past because of the characteristic rings on her hooves – wider at the heel than at the toe.

Adam suggested reducing her feed, letting her rest in her stall, soaking her front hooves in cold water, and inquiring with my vet about anti-inflammatory medication. I had never dealt with laminitis in a horse or pony before and didn’t recognize the symptoms, and hate to think what would have happened to Sunny if Adam had not been there. X-rays were needed for a really accurate diagnosis, so I called the Ottawa Valley Large Animal Clinic. Meanwhile, Adam put heart bar shoes on Sunny’s front hooves to support the bone column.

It was a bitterly cold day when Dr. Larry Butler of OVLAC arrived to x-ray Sunny, but by employing a tiny heater and working quickly he managed to get the images. “We have a case of founder going on,” he confirmed. Sunny had a six-degree rotation of the coffin (pedal) bones, with areas of inflammation in both front hooves. Now at least we knew exactly what we were dealing with.

The recommended treatment for Sunny was bute, antihistamine, and soaking her hooves in hot water for half an hour three times a day. While in the initial stages of laminitis cold water is generally recommended to stop the swelling in the laminae (the tissues connecting the coffin bone to the hoof wall), as the condition progresses hot water is the norm. In extreme cases, resection is sometimes necessary – a procedure in which a section of the dorsal hoof wall is removed to relieve swelling, release pressure from the coronary band, and drain any abscesses.

In Sunny’s case, temperature changes were advised to help restore circulation, so I would put Sunny on snow for half an hour, then in hot water for half an hour, and then into her stall for two hours to rest. When Dr. Butler first suggested three half-hour soaks a day, I said in a shocked voice: “But that will make three hours a day of soaking!” A bemused Dr. Butler then pointed out how it is perfectly possible to soak both front hooves simultaneously.

An unused stall with a soft-stall floor became Sunny’s “treatment room.” As usual, despite the pain she was in, Sunny was a perfect patient and accepted everything with good grace. While her feet soaked in the hot water, I would make little whirlpools with my hand and do (Tellington) TTouch on her. It seemed like a comforting thing to do, and I was pleased when I discovered that the late Burney Chapman, well-known proponent of the heart bar shoe in the treatment of laminitis and founder, actually wrote of the benefits to the horse of “turbulating” the foot to bring any lurking abscesses to a head and increase circulation. He added that “it just seems to make the horse feel better.”

Other care included the endless cleaning of Sunny’s stall and the spreading of deep shavings, lots of grooming to give her some company, and the “Easter egg hunt” once she was able to be outside, in which I would divide her small flake of hay over a wide area of snow so she would get a bit of gentle exercise to relieve some of her boredom. For equine company she could visit “the boys” (our three geldings) over the fence.

In the course of two months I put in well over 150 hours nursing Sunny, and I’m extremely grateful to both my farrier and the veterinarians for their good advice. Without them I can’t imagine Sunny would ever have recovered. Sunny’s regime was tailor-made for her since, as Adam points out, each horse is an individual, and what works for one won’t necessarily work for another.

OVLAC’s Dr. Megan Fine did a follow-up visit to Sunny and while she was pleased with her progress, she was also realistic about her future. Damage already done to the laminae of the foot can leave the tissue compromised, and the rotation of the coffin bone is irreversible. She advised that corrective hoof trimming and shoeing was the key to recovery. “You are working on stimulating good blood flow when the frog is allowed to make normal contact with the ground, creating a more rapid and easy breakover which eliminates unnecessary tension on the flexor tendons, while protecting the dropped sole of the horse to prevent trauma to the now more exposed tip of the coffin bone.”

According to Adam, it would take about a year for Sunny’s hooves to get fully adjusted to this new reality, but my hope is that with the continuing help of the farrier and veterinarians she will remain functional. Adam’s teacher, Dr. Doug Butler (no relation to Dr. Larry Butler), author of Laminitis and Founder, Prevention and Treatment for the Greatest Chance of Success, says this about treating founder:

“A combination of medical and mechanical treatments is necessary to solve a horse’s problem when it is foundered. The cause must be determined and the swelling, pain and systemic condition(s) treated. The bone column must be supported while the horse grows a new hoof.”

According to Dr. Butler, mismanagement due to overfeeding idle horses causes 70 to 80 per cent of laminitis cases, and I’m hoping that by reducing Sunny’s feed I will be able to prevent any future episodes.

Along with good quality hay (hay for horses tends to be richer today than it was in the past), Sunny had been getting an alfalfabased supplement. I hadn’t realized the supplement contained alfalfa, since it wasn’t mentioned on the label, and I now feel strongly that feed companies should be required to list all ingredients on the bag, instead of stating that a full list of ingredients “may be obtained from the manufacturer or registrant.” It’s not realistic for horse owners to try to reach a “formulator” about every bag of feed they purchase.*

Knowing what you’re feeding can be of particular importance for owners of equines with metabolic issues. Recent studies have shown that a large proportion of horses with laminitis also have an underlying endocrinological disease such as equine metabolic syndrome (EMS) or Cushing’s syndrome. Equine metabolic syndrome, which can strike horses of any age, is in fact characterized by obesity, insulin resistance, and susceptibility to laminitis.

As Adam, Dr. Larry Butler, and Dr. Doug Butler have all said, you can indeed “kill a horse with kindness”, and our two ponies are now on a very strict diet. It may be hard to deny your ponies and idle horses treats, grain and supplements while others are munching away, but if you’ve witnessed the excruciating pain suffered by a victim of laminitis or founder, then you’ll know that keeping a horse or pony at its proper weight is the kindest thing to do.